The series of Climate Lectures was opened on the 21st of January 2008 by President of Yale University, Richard Levin. He talked about sustainability and about how Yale has made plans to reduce its CO2 emissions.

The Danish Prime Minister, Anders Fogh Rasmussen, was the second speaker in the series. In his speech "Count-down to Copenhagen" he talked about climate politics and the expectations to the UN Climate Summit in Copenhagen in 2009. The lecture was given the 22nd of February.

The 26th of February senior economist of the Stern Team, Graham Floater, visited Copenhagen University to discuss the pioneering work of the team and their latest research. The Stern Review, named after British economist Nicolas Stern, came out in 2007. This comprehensive review of the economics of climate change changed the international terms of debate on climate change irrevocably.

The President of the European Parliament, Hans-Gert Pöttering, visited Copenhagen University the 1st of April where he gave his lecture "Rising to the Challenge - A European Strategy for Addressing Climate Change at a Global Level".

Professor, Jacqueline McGlade, the Executive director of the European Environment Agency in Copenhagen, continued the lecture by giving her interesting speech about the transition to "The Post-Carbon Society". In her speech she outlined the economic, social and technological efforts needed in order to tackle climate change. In addition, she highlighted some of the impacts of climate change already seen in Greenland in order to illustrate the challenge.

Royal Dutch Shell's renowned energy scenarios have, for many years, helped energy experts and taught leaders around the world to anticipate the evolution of global energy supply and demand.

Shell's 2008 energy scenarios show two plausible ways in which the globe's sources and uses of energy may evolve over the next half-century. These two scenarios show how the world will grapple with three hard truths: the surge in global energy demand, the end of easily accessible oil and increasing environmental stresses including the impact of greenhouse gas emissions.

Wade Troxell gave the 20th of June his lecture "Winds of Change" on Colorado State University's (CSU) effort to become 100% green and on the potential of "smart grids".

The wind project is a better and more efficient way to make use of renewable energy and is the cornerstone of the green strategy at CSU. Dr. Wade Troxell told us about the concept of "smart grids" and how these can enable more wind and solar energy production and consumption.

Dr. Wade Troxell also informed us how students and management are motivated for renewable energy consumption at CSU, and how other universities can use this experience to promote greener energy consumption, and what we can do together in a worldwide network. CSU can therefore very well serve as a model for other universities, which seek to enhance a greener energy use.

Professor Mohan Munasinghe, Vice president of the IPCC,  gave the 9th of September his Climate Lecture for a full Ceremonial Hall. He focused on the developing countries and sustainable development.

Stephan O. Andersen has been taking part in international climate negotiations for many years. He was one of the chief negotiators when the Montreal Protocol was negotiated. The 8th Climate Lecture was held the 27th of October.

Vice president at Boeing International, Jan Narlinge, discussed Boeing, the aviation industry and their focus on bioenergy at the 9th Climate Lecture hosted by Copenhagen University. This lecture was held the 18th of November.

The lecture touched upon how Boeing is using a life cycle approach to minimize the ecological impact and gave examples of the technologies that Boeing believes unlocks the future to environmental performance. A priority element is the research and challenges of new fuels where CO2 and efficiency are the main concern. The lecture exemplified how Boeing is increasing its research to improve efficiencies throughout the system both in air and ground operations as well as in-service fleet environmental performance and introduction of sustainable 2nd generation fuels.

Minister of Climate and Energy, Connie Hedegaard, spoke the 18th of December about the content of COP14 just after the COP14 in Poznan and the road towards COP15 in Copenhagen. The lecture was in Danish.

Christoph Schär, assistant professor at the Niels Bohr Institute, spoke Thursday 29 January at the Biocenter about the future climate that, among other things, will be characterized by varying and fierce weather changes, and on the processes that underlie the future of violent weather changes.

Will Steffen, professor at Australian National University and honoray climate professor at the University of Copenhagen, spoke the 17th of February at the Department of Geography and Geology. The title was "Climate Change and the Anthropocene: Where on Earth Are We Going?"

Wind power has been growing more than 27 % per year over the past years (2000-2007). According to International Energy Agency's (IEA) most ambitious forecast scenario, wind power installations could rise to 700 GW by 2020, which will raise wind power's contribution to the world's electricity needs from the present level of 1 % to approximately 8 %.

In Denmark, the wind adventure has been growing since the late 1970's and today wind power has a strong position in the Danish energy mix making up for 20% of Denmark's electricity use. This world record in wind penetration and ambitious plans for much more wind energy has made Denmark a world leader within the wind industry.

Professor Anthony J. McMichael held this Climate Lecture on May 26 2009 as his inauguration lecture on Human Health in the perspective of the Climate Changes, as the University of Copenhagen was pleasured to presentate Professor McMichael as an honorary professor at the Health Science Faculty.

The professor in Climate Economics, Hans-Werner Sinn from the University of Munich and CESifo, will at this lecture entitled "Table or Tank: Why Biofuels are a Blind Alley" spoke at September 2nd, 2009 on the subject of the economics behind the proposed substitution of fossil fuels with biofuels.

Councelor to the U.S. National Intelligence Council (NIC) Dr. Mathew J. Burrows was the principal drafter for the NIC publication Global Trends 2025: A Transformed World that was published in November last year. In his lecture Dr. Burrows spoke on the national security challenges and opportunities through 2030 resulting from global climate change that the United States is facing.

Professor Diana Liverman (pdf) is Director of the Environmental Change Institute, Oxford University Centre for the Environment. She visited the University at October 1, where she lectured on the roles and effectiveness of actors in reducing the risks of climate chang.

The UN Secretary-General Ban Ki-moon visited the University and held a lecture entitled The Road to Copenhagen: Meeting the Climate Challenge at October 3, 2009.

Dr. Jane Lubchenco, science advisor to the Obama Administration, a marine ecologist, environmental scientist, and the ninth Administrator of NOAA, appointed by President Obama, held on Friday, November 13 the 21st Climate Lecture in the series of lectures at the University of Copenhagen. The title of the talk is Climate science, climate services.

On November 18, 2009, Professor Steve Rayner from University of Oxford addressed the problems of the conceptual architecture of the Kyoto policy strategy and also touched upon the processes behind climate policy and policy making.

In connection with the workshop in cooperation with Yale University, the University of Copenhagen hosted a Climate Lecture with and by students at December 14, 2009.

IPCC Chairman, Dr. Rajendra K. Pachauri, gave a Climate Lecture at the University of Copenhagen on December 15, 2009. The topic of the PowerPoint presentation made by Dr. Pachauri was the key findings and solutions from the IPCC Fourth Assessment Report. 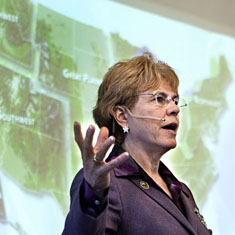 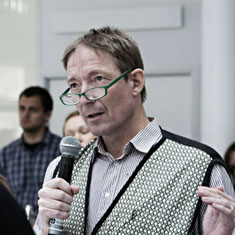 Questions from the audience 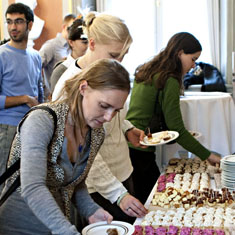 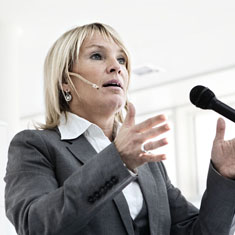